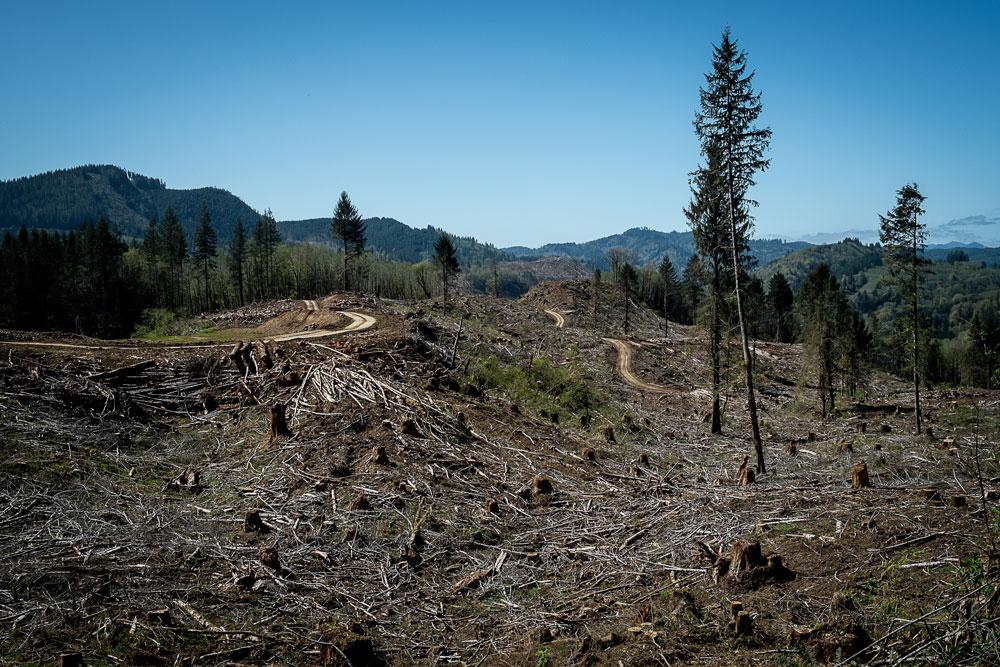 Conservation groups and community members are sounding the alarm in response to the Oregon Department of Forestry’s woefully inadequate plan to meaningfully address climate change as they are required to do under Governor Brown’s Executive Order EO 20-04. In March 2020, Oregon Governor Brown issued EO 20-04 to prevent the most serious, catastrophic impacts of climate change. The Executive Order calls on all of Oregon’s agencies to submit a report detailing how they will exercise their full authority and discretion to reduce greenhouse gas emissions and help impacted and vulnerable communities adapt to climate change. Despite these clear directives, and despite the fact that logging is the number one source of emissions in the state,  ODF submitted a report that fails to identify a single measure the agency will implement to reduce logging pressure.

While some other state agencies have submitted robust proposals with concrete steps toward achieving greenhouse gas reduction goals outlined in (EO) 20-04, ODF’s report is absent of a clear timeline for public engagement or any concrete steps toward achieving climate goals. ODF could have taken this opportunity devise creative climate-smart alternatives to destructive logging practices, such as the long list of interventions recommended by the Forest Carbon Coalition and its partners in May.  Instead, they focused their report on far less impactful efforts such as greening their transportation fleet, and have dodged their forest-climate responsibilities entirely by citing the need to explore whether they have authority to take action at all (ODF is currently awaiting a response from the Department of Justice in regards to this question).

Pacific Northwest Cascade and Coast range forests are unique in their ability to capture carbon efficiently and have the potential to take up as much or more carbon per acre than tropical forests. An Oregon State University study published in December of 2019 in the journal Ecological Applications, found that not logging carbon rich forests would be equivalent to halting six to eight years of the region’s fossil fuel emissions.

On the ten million acres of forest that ODF management influences, rampant clearcut logging on short (average 50 years or less) rotation cycles is the most common practice. As a result, these highly productive industrial lands store about two thirds less carbon than they could if they were allowed to grow older. The carbon not stored in these forests stays in the atmosphere where it contributes to the climate crisis. Oregon’s forests could be part of the climate change solution; instead they are part of the climate change problem.

If ODF takes an honest look at the heart of the forest-climate issue, they must acknowledge that clearcut logging contributes greenhouse gas to the atmosphere, disrupts long-term ecosystem stability in the face of a changing climate and undercuts our state’s most important natural climate solution.  In order to take this role seriously, ODF must devise concrete steps for transitioning away from climate-polluting clearcut-plantation management and towards climate-smart forestry that optimizes carbon sequestration and long-term carbon stores in forests. Industrial logging practices greatly reduce a forest’s carbon storage capacity, creating sequestration (i.e. capture and storage) dead zones where carbon storage  is delayed for years and a substantial carbon debt accrues to the system that is not offset by planting trees, storing carbon in wood products, or wood substitution. Optimizing carbon stored in forests by allowing them to mature is vital to Oregon’s future.

While ODF has so far proven unwilling to take steps needed to address climate change, the Oregon Global Warming Commission (OGWC) has the power to direct ODF toward real climate-smart solutions. Executive Order (EO) 20-04 requires natural and working lands agencies to work with the OGWC to produce final reports by June 30, 2021 outlining steps to reduce climate change pollution and promote carbon sequestration and storage by Oregon’s natural and working landscape including forests, wetland, and agricultural lands. These steps must be based on the best available science,

In 2018, the Oregon Global Warming Commission produced an Oregon forest-carbon accounting report that found how we manage our forests can have a significant effect on Oregon’s carbon footprint and even our global carbon impact. The study found that almost three quarters of net carbon stores are found on publicly owned (mostly federal) lands while private lands store far less carbon in forests. Unsurprisingly, this difference is due to difference in management practices. While intensive, short rotation logging practices dominate private land management, public lands enjoy more protections and therefore are able to maintain impressive carbon stores in old forests that are not threatened with clearcut logging every thirty years.

Since the Oregon Department of Forestry has demonstrated an inability to meaningfully address the climate objectives outlines in (EO) 20-04, the Oregon Global Warming Commission should take a leadership role in directing ODF to take action.

Please stay tuned for further updates from FCC on what we are doing to ensure that Governor Brown’s EO 20-04 catalyzes a rapid transformation away from industrial forest practices and towards climate smart alternatives that provide a model for other states as they roll out their own climate action plans.

The bodies are still being counted. The land is st

You can see Canada from here! Truly, looking over

These gorgeous Oregon grape clusters grow in the u

One of our photographers, @amandalynn_photo, enjoy

The forest floor is full of life when its trees ge

This @wired article found on the link in our bio s

Go off, forest! The colors from this aerial photo

The river winds its way from the frigid snowpack o

Right now, it’s hard to see the sunlight through

The tiny, delicate bells of the Piggyback plant (t

Our Forests Aren’t Fuel, but logging and burning

The sun filtering through the trees reminds us tha

Hikers everywhere know the siren song of a blue la

When the sun’s up, the clouds are scudding acros

The architecture of our great forests is revealed.

Scroll back to top